The Alabama Militia is distinct from the Alabama State Defense Force (Alabama State Militia) in that it is not recognized as part of the organized militia by the government of Alabama, but is rather citizens who are formed as an unorganized militia. Our Area of Operation is is within the State of Alabama. We promote, uphold, and defend the Rights Secured in writing to the people within the US Constitution, the Bill Of Rights, and the Constitution of the State of Alabama.

The unorganized militia shall consist of all able-bodied male resident citizens of the state and all able-bodied resident males who have declared their intention to become citizens of the United States, between the ages of 17 and 45, and of such other persons, male and female, as may, upon their own application, be enlisted or commissioned therein, subject to any existing law, who are not serving in any force of the organized militia and who are not on the state retired list. 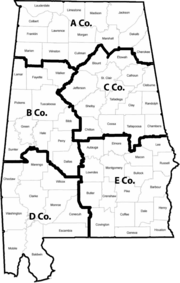 Today's militia has a wide spectrum of missions, from disaster relief to terrorism prevention. One role of the militia is defense of the state from terrorism or invasion. Other roles include disaster relief, search and rescue, emergency preparedness, education, and serving the community.

Alabama Militia is the Militia many are looking for but have never found. Everyone is welcome, regardless of race, creed, gender, color, religion, or political affiliation, provided you do not wish to bring harm to our country or people. The Alabama Militia does not tolerate Racism, Right/Left/Center Wing Extremism, Anti-Government or Anti-Law Enforcement Agendas.

We are not a militant or inciteful group

We are not a hate group.

We are not anti-government.

We are not conspiracy nuts.

We are not extremists.

Our purpose is to serve, aid, and protect our families and communities.  If you are an Alabama or Southern Tennessee citizen (or have declared your intent to become such), who is legally capable of bearing arms, then you will be welcomed in the Alabama Militia.

Given that we are an all volunteer force, much of our supplies are derived directly or indirectly from our members. You will be responsible for your equipment and supplies, however we will assist you in choosing the best options to prevent spending your money on items that are not needed.

We can serve our communities by raising money for charities and assisting in disasters through the CERT Program. Given that the militia is primarily defensive in nature, it is natural that much of its resources should be aimed at bettering the communities from which it is derived.

We understand. The militia is unlike anything you've probably ever experienced. It requires you to ask more of yourself, to learn new skills, and to take the path less traveled. It requires courage, integrity, and strength of character. In the militia you will be charged with defending your fellow man, helping those in need, or facing disaster. It is a choice that you must make. For many of us, the choice was made early in our lives.

We wish to retake the original meaning of Militia in our service as “Citizen-Soldiers” to our communities.  Both as an aid to our local Sheriff’s with public safety and in aid to preparing for and responding to community disasters.

(Adapted from US Army Leadership)

Loyalty - Unwavering support and allegiance directed to the U.S. and State Constitutions, our unit, and our fellow citizens.

Duty - Performing tasks as assigned to the best of your ability. Fulfill obligations.

Respect - All individuals, surroundings, and community.

Selfless Service - Place the welfare of the Nation, State, and fellow citizens before your own.

Humility & Honor - The integrity to see the truth and admit mistakes.

Integrity - A personal quality, a moral compass that does not waver

Personal Courage – The quality of spirit, that enables us to face fear, danger, or adversity.